Hello & thank you for joining us for the April issue of the Monthly Howl! We hope the spring season is proving fruitful for you. This month has been interesting and productive! A recent rescue from a breeding operation in Minnesota enriched our sanctuary with four new animals. Unfortunately, as we say hello to the new, we also say goodbye to Rayne and Nakota. Students from Navajo Tech have visited us once again and have continued to help us move forward on various projects.  Last, but not least, we hosted a couple of cherished supporters, including famous author, Jane Lindskold, and longtime sanctuary friend, Marie Sikora.

About 4-5 months ago we received reports that a prominent breeder and seller of wild animals in Minnesota was being rezoned and shut down. This was going to create a situation in which many animals would be in need of new homes. This individual bred mountain lions, raccoons, bob cats, foxes, wolves and wolf dogs, amongst others. Even though we had known about this breeding operation for months, we had to wait before rescuing any of the animals due to legal issues the owner was facing. After a long legal battle and much resistance, this breeding operation finally closed down and we were given the go ahead to go rescue four male wolf dogs and four Arctic foxes.

Unfortunately, those exact circumstances did not play out as we did not have the proper license to take in the Arctic foxes. However, we did rescue wolfdogs, Walking Bear, Sioux, Crow and Chiracowa. Director, Leyton, and trusted driver, Steve Staviski, left for Minnesota on a Saturday, but were turned around mid-way due to a massive snow storm that prevented them from reaching their destination.  After a few days of waiting for the weather to clear up, they departed once again for a five day trip.  Fortunately for all involved, the four boys were social enough to make the loading process into our transport vehicle super easy. Since they were never leashed, they were simply picked up and tossed over their caretaker’s shoulders!

All four rescues were taken to Canyon Crossroads Animal Hospital to be neutered and to receive health checks. Bear (5 yrs.), Crow (4 yrs.) and Chiracowa (9 yrs.) underwent the surgery to be neutered while Sioux (14 yrs.) received x-rays on his spine. X-rays revealed Sioux has serious arthritis along his spine and therefore was immediately put on anti-inflammatory supplements and pain medication; he also went on a diet to shed some of the weight that may be aggravating the pain. Thank you to the team at Canyon Crossroads for making an opening for us to be seen! 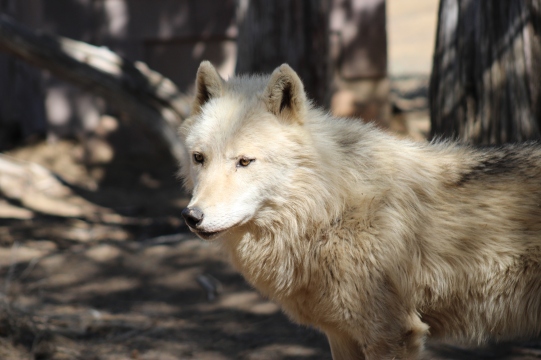 Because they were extremely social, human-loving animals, some of the new boys had a hard time adjusting to their new home. They were perfectly well taken care of and loved at their former home and being in a new environment was scary for them. After just two days of being here, Crow tried to escape his temporary habitat. It was only due to miraculous timing and quick reactions that a volunteer and staff member were able to prevent the escape by forcing him back into his habitat.  At the time of the attempted escape, our team was working diligently on “Flicker-proofing”Honey’s new habitat. Thankfully, it only needed another hour or two of work, so we moved Chiracowa and Crow into this habitat and continued to work towards completion. After a week of settling into their new homes, we opened the gate to the adjoining habitat so that Chiracowa could walk into his new habitat with new companion, Arya. Later, we took Honey out of her temporary habitat and placed her into her new, much larger, space. Both new couples seem very happy, Honey especially! 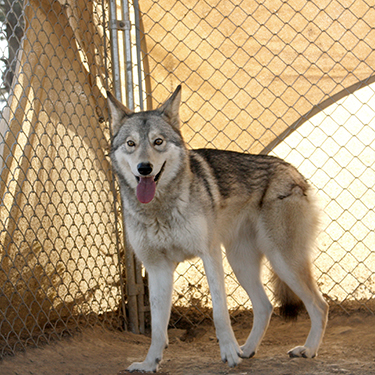 On the day of their arrival, Sioux immediately was placed with Savannah. It took him no more than two days to settle into his new environment. He loves his morning meals and he loves having a new companion in his life. He especially loves forehead and butt scratches! We are already watching him begin to build muscle in his back legs which puts a big smile on his face, and ours too! Bear was put into Flicker’s habitat on the same day. He took the smallest amount of time to adjust to being in a new home and was very loving toward his new caretakers. Unfortunately, due to the Crow incident and watching as 10 human beings went into the direction of his buddies, Bear has now convinced himself that seeing more than one human at one time is not a good sign. Due to the location of their habitats, Bear cannot see that Crow and Chiracowa are not harmed, and are in fact doing just fine. Since the incident, he has not come to the caretakers for attention, but we are hopeful that he will calm down soon.

Providing new life does not come without losing a life, or in this case, two. For those who have been following us, you are aware that our low-content wolfdog, Rayne, had been diagnosed with splenic cancer in February of 2018. We understood that we didn’t have much time with Rayne, so we continued to focus on giving him the best life. He enjoyed his new companion, Flicker, for the short time that he had her. When his quality of life began to fade, Animal Care Supervisor, Rae, helped him onto the Rainbow Bridge. Rayne was a spunky, fun loving animal and had a signature bark. We miss him and his daily morning demands (barks).

We also said goodbye to high-content wolfdog, Nakota. Nakota arrived to WSWS with his best friend, Lani, in 2007. After Lani passed away in 2012, we paired him with Silva. The two hit it off without a hitch and spent over 5 good years with each other.  Unfortunately, Silva’s life came to an end in 2017, leaving Nakota lonely and mournful. Arya had recently lost her longtime friend, Ghost, and also needed a mend to her broken heart. The two were introduced, and although it wasn’t true love, both were happy to have companionship once again. In the weeks leading up to his death, it became evident that Nakota was in the beginning stages of organ failure. We always allow the animal to leave this world on their own terms and prefer for them to leave in the comfort of their home, with companions close by. Sometimes, they leave us peacefully and in their sleep. Other times, we standby as the animal goes through their own process. If the animal’s quality of life diminishes, we intervene. This was the case for Nakota. He was such a strong willed animal and we knew that he wanted to go on his own, but in the end, he couldn’t. Nakota was such a strong willed character that we even wanted a second opinion from our veterinarian and had an appointment scheduled for him to have a quality of life discussion. However, the day of the Crow incident (and the day before his scheduled appointment) with so many people around it was abundantly clear that Nakota was not able to help himself along. Assistant Director, Crystal, facilitated his peaceful exit. In the days leading up to his departure, Nakota was visited by a few who had the privilege of being his caretaker in the past and surrounded him with love. We all hold so much admiration for Nakota, the tough, proud and handsome wolfdog.

Students from Navajo Tech visited us again in April and as always, helped with tremendous progress on a few large projects! They worked on our new perimeter fence project, which is the first step needed before we build two large habitats in the future.  They also worked at one of our rentals, the Retreat Center, where they installed handrails on its massive deck. While they worked on those projects, others assisted our Building & Maintenance department with Honey’s habitat. We are so thankful we had them for this project, as we may not have been ready for the unexpected move of Crow and Chiracowa! For good measure, they also helped with fire prevention by cleaning up downed trees and low hanging brush from the wooded areas surrounding the sanctuary. Thank you to Navajo tech for volunteering your time and to Parris McBride-Martin for paying their expenses for their stay! 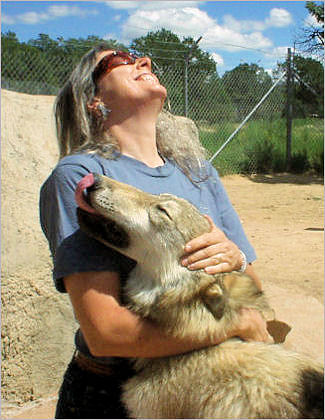 Speaking of the Martin’s; a friend of George’s, who is also a famous and successful author, Jane Lindskold, visited the sanctuary with her family in April. They were the first guests to attend one of our Education Presentations and provided us with great feedback on our new format! We were happy to hear that they loved it and considered it to be an excellent presentation. Jane enjoyed her time here so much that she actually wrote a blog post about her visit! Thanks for visiting us Jane! It was wonderful to host you and your family.

Last, but certainly not least, cherished friend of the sanctuary, Marie Sikora, visited from Australia and stayed with us for two weeks. Marie’s first visit to WSWS was in 2009 and her love for our sanctuary grew from that moment on. In the years since her visit, Marie has sponsored several animals and has supported many, if not all, of our fundraisers. She has given so much to our rescues over the years and we are so thankful for her love and support. Many guests and supporters cannot say that they’ve seen the “behind-the-scenes” of WSWS. Not only did Marie get to see what goes on, but she was also able to be a part of it, even helping us during the Crow incident. Marie, it was such a pleasure to have you visit with us!  We look forward to hosting you and your family in the future!

We are incredibly grateful to you, our readers and friends. We could not exist with your support!

Howls of thanks, from the staff, volunteers and rescues of Wild Spirit Wolf Sanctuary!